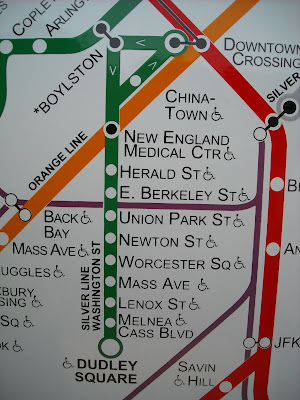 Wishful thinking? A "green" Silver Line map installed at Mattapan Station
Tonight a community meeting will be held at the Mattapan Branch Library to discuss improvements for the Route 28 corridor. The conversion of the heavily traveled route into an extension of the Silver Line will be on the table for public review. Nice to let the public get involved.

Route 28 riders in the not-to-distant future will see their service upgraded to Bus Rapid Transit standards, certainly a step up from the current service provided. The boost promises to bring a better and faster commute to Mattapan, Dorchester, and Roxbury residents. It shall feature priority signaling, HOV lanes, improved bus stop amenities, sixty-foot vehicles, among other delightful BRT elements. It even has a cool name: The "28X"! What more could a transit-dependent community ask for!?

Perhaps real rapid transit, you know, the kind with tracks and a grade separated right-of-way?

For a community that has not seen a trolley since the days of the Type 5's (that would be circa 1955), would replacing a bus with a shinier and larger bus actually provide adequate transit? South End and Roxbury residents still have the sour tastes in their mouths from the Route 49 conversion to the Silver Line. Or as they call it, the "Silver Lie". Will the "28X" really be immune to the problems that the Silver Line Washington Street faces almost daily? Like the Route 49 and ex-Washington Street Elevated riders, are these residents going to be given the short end of the straw when it comes to "real" rapid transit?
It is great to see the MBTA and the Executive Office of Transportation investing so much money in public transit (take that, automobile lobby!). Any improvement to the Route 28 corridor is a great one, but I still have my doubts and some questions. Namely, what happened to that proposed Orange Line branch to Mattapan?
More to come later...
Posted by The Lone Rider at 2:49 PM 1 comment: 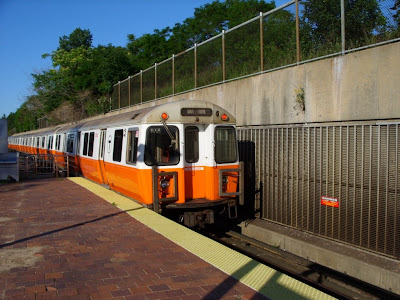 Today marks the 22nd anniversary of the opening of the Southwest Corridor on the Orange Line! 22 years ago last Thursday (April 30th), the Washington Street Elevated ceased service after 86 years. With its demise, Boston lost its last major el (save for the short bit in front of the Boston Garden on the Green Line). Many bus routes that terminated at Dudley Station were extended to the new Ruggles Station. Route 43 was also cutback from Egleston Square to Ruggles, while Route 22 was rerouted from Warren Street to Seaver Street and Columbus Avenue. Route 28 entered service at about this time as well. Oddly enough, Route 29 would still provide the bulk of service in the Blue Hill Avenue corridor for a few more years. Very different from the service patterns operated today! The 49 also stepped into the spotlight, no longer a back and forth line from the South End to Chinatown, but now the service from Dudley to Downtown.

Thank goodness the rapid transit extension was built instead of the highway.
Posted by The Lone Rider at 2:36 PM No comments: