Service Has Resumed With Residual Delays...

Wow, my last post was on February 21!? Jeez! Sorry for being offline for such a long time, I've been pretty busy lately. Anyway, I'll start off with some news updates. 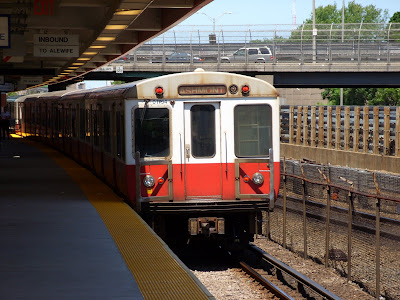 Six 1700 series cars have been set aside at Cabot Shops (the Red Line yard) for repairs and may be the first of the 1700's to go into overhaul. The overhaul program, slated to begin later this year or early in 2009, includes cam and brake work, upgrades to the power systems, and possibly digital destination signs and automated stop announcements (like on the 1800's).

On the Orange Line, work continues on repainting and overhaul work for the 1200's. The refurbished cars are easy to spot with their bright and glossy orange, white, and gray paint jobs.

Another train of the new Blue Line cars (700's) has entered service bringing the total to eight cars in revenue service. 86 cars are still left to be delivered. Now, commuters have a 1 out of 7 chance of getting on of the new trains during rush hour.

Sorry, nothing big going on with the Silver Lines lately.

As for the bus system, all pullouts from Cabot Garage on Routes 22, 23, and 28 are to be only camera buses beginning this rating (Spring 08). Several buses from Charlestown/Bennett (0610, 0612-0616, and 0620) have been transfered to Cabot to meet the peak requirements. More NABI buses are planned to be retrofitted with security cameras sometime down the road. Currently on buses 2201-2204 such systems are installed.

Odd bus sightings included an unusually (at least for me) large number of Lynn RTS buses at Haymarket (almost always Neoplan AN440's), New Flyer's in East Boston for the Blue Line shuttle, and a New Flyer on the 66 (normally not assigned to that route).

The Long Rider
Posted by The Lone Rider at 3:54 PM No comments: