I find it ironic that at one time Boston's transit system won the A. N. Brady Safety Medal so often that it was asked to stop competing in order to give other cities a shot at winning. Now, hardly a week seems to go by without something going wrong.
The Brady Medal was awarded for "the best work done during the year by an electric street railway [subway trains counted too!] in America in accident prevention and industrial hygiene." The way things have been going lately, it looks like the T is out of the running.
The Commuter Rail fender bender was somewhat minor. Thank goodness there were no serious injuries. The Red and Orange Line meltdowns, on the other hand, nearly paralyzed downtown transit. The Red Line was shutdown between Harvard and JFK/UMass as fire crews tackled an electrical fire. I am a bit foggy on the electrical layout, but track-wise there are crossovers at Kendall and Broadway that could have made the isolated area much smaller. Overkill? Maybe. My thanks to anyone in the Power Department for any clarification. At least Orange Line service bounced back relatively quickly.
With all this transit mayhem, who knows what will happen next? Aliens stealing all the NABI's at Arborway? I could only imagine what the T Riders Union would have to say about that. 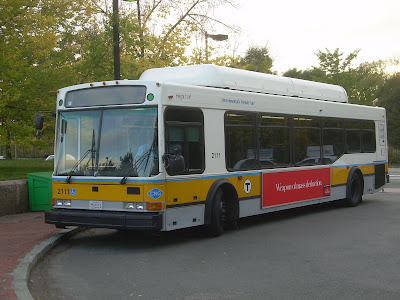 On a personal front, I've been getting a mixed bag. Monday morning found me on car #01746. There is nothing special about the car - it is just like the other 57 1700-series Red Line cars - except for one thing: it smelled of urine and death. Well, maybe not "death" per se, but the stench could have reasonably led to it. The floors of the car also looked suspiciously wet. #01746 is now on my "Do Not Ride" list.
I was also gleefully entertained by a senile old man on the 08. As he railed against the dangers of smoking and relived his days as a former boxer (he constantly reminded us of that fact), he would take a break and begin yelling at this one woman in the back of the bus. No clear reason, he just wanted to shout obscenities at her. The rest of us found it all to be pretty funny.
Later on I spotted the elusive 275 at JFK/UMass. Here's the picture I snapped: 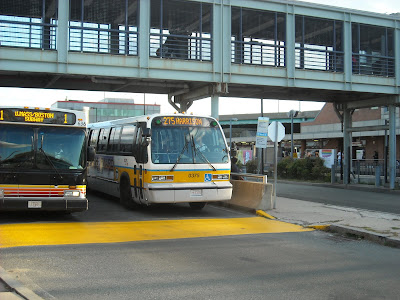 Now I just need that shot of the 274 at Moon Island.
Well, enough of my ramblings. I'll have more notes from the underground later...
Posted by The Lone Rider at 8:15 PM No comments:

After a much needed vacation I'm back in town. Getting away for a few (very long) weekends has refreshed me. I was actually worried about taking a vacation in late August, as I would miss the MBTA fare increase workshops and hearing. Governor Patrick, however, helped to straighten out my schedule. Thanks, governor! I enjoyed being able to get up to Maine for a bit and need not worry about missing out on the fare increase public discussions. I owe you one.
Well, let's see what happens in November.
You may have read in the paper recently about the MBTA extending the hours that the Student Pass is valid. Young people who work late, have afterschool activities, etc., are now able to use their passes until 11:00pm. I want to congratulate the youth activists that worked hard to accomplish something that many naysayers said was impossible (or impractical, if not downright pointless). Great job! Keep up the fight! 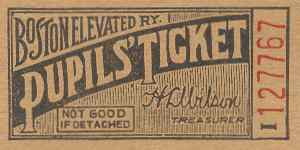 Image Courtesy of Celebrate Boston
Yet not everyone is excited about the news. Many detractors have criticized the decision. Boston.com had some of the best feedback. Here was my favorite:

"Great, now there are three more hours in a day for me to get stabbed on the MBTA."

Ah, of course! Because every young person's mission is to rob, incite fear in, and terrorize their fellow commuters. Shame to see someone generalize (*cough*stereotype*cough*) like that. There are some young criminals out there, unfortunately, but not every kid wearing a hoodie is out to get you. I admit, some of those goth kids kinda creep me out. Still if you are going to criticize, let it be constructive.
Other than that, I visited the new Ashmont Station busway. Even spotted a New Flyer C40 (#6001) in regular colors. Supposedly, said the inspector, it is now doing Cabot work. 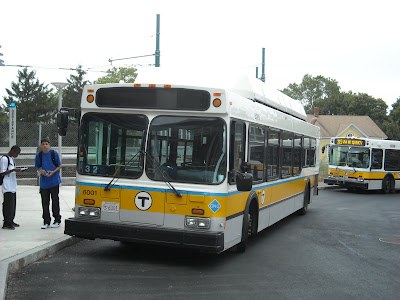 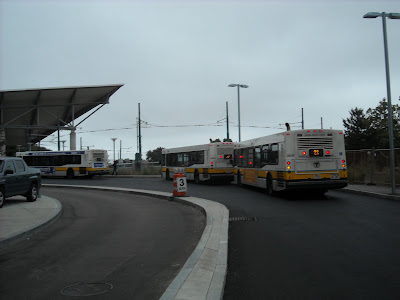