After over twenty years, Route 195 is being discontinued. Chances are you have never heard of the 195. Many operators (including ones from its own garage!) have not either. The route makes one inbound trip from the Shattuck Shelter (on the edge of Franklin Park) to Park Street Station each day at 8:05AM. I plan to ride the final trip this week and will have some photos.
Posted by The Lone Rider at 5:49 PM No comments:

The MBTA will issue new schedules this coming Saturday (December 27). Be sure to pick up the green ones from the station or your driver. See the MBTA website for details.
Posted by The Lone Rider at 5:48 PM 1 comment:

Failure, Thy Name Is Route 111

After the series of storms that hit the region this past weekend, I would expect surface transit to be a little slow. Maybe even some moderate delays (10-15 minutes). But the 111 seems to have had some trouble bouncing back.

It all began Monday morning. The AM Peak had just ended and I had a few errands to do. During the AM Base, there are about five buses on the line. Whenever I catch the 111 at this time, I can count on having ample seating to choose from. Today was a little different...

0732 arrived at my stop, packed to the gills. I managed to squeeze on and find a spot near the driver. He informed me that some buses had been pulled off the line and/or broke down. He was really feeling the crunch. En route to Boston, we were drop-off only. Well, we tried to be at least. At Fourth Street, the driver announced that he had room for only one more person.

Naturally, seven people attempted to board.

We made it into Haymarket at last. The TransitMaster was running so late that it reset itself. They tend to do that, it seems, when they are running over 35 minutes late.

0732 was forced to deadhead back to Woodlawn. The driver wanted to make sure that there was at least one bus in Chelsea.

The PM Peak, frankly, was not much better: 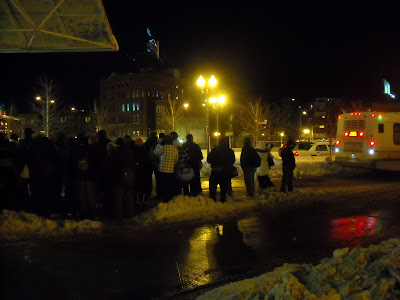 The Lynn operators had to exit the station carefully,
lest they strike someone waiting for the 111 in the busway.
The berth at Haymarket was overflowing with people. Perhaps 50-75 cold souls waited for the 111. The bus on the right was a 111, but was pulling back to Charlestown Garage. Several more followed suit, much to the dismay of the waiting passengers. Fed up, they "surrounded" a bus (0686 I believe) about to pullback, with hopes of forcing the driver to do another trip. Two more buses were roped in as well. 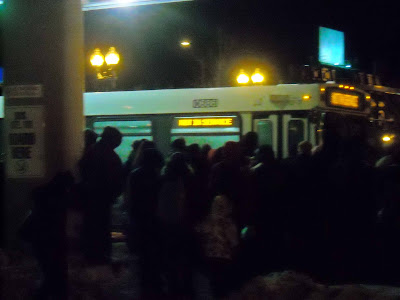 The Angry Masses. Oh the humanity!
The bus in the above photograph held off on opening its doors. A second bus pulled in behind it and felt the brunt of the crowd. That driver had to kick several people off, just so passengers were not pressed against the windshield. I boarded 0686 (Central made the operator do some overtime), which was not too crowded (about twenty passengers). When I reached my stop, the TransitMaster proudly proclaimed that the bus was 22 minutes behind schedule. A mere 22 minutes!

I believe I will be taking the Commuter Rail into town from now on. Those locomotives seem able to power through just about anything.
Posted by The Lone Rider at 2:39 PM No comments: