The Muses Ride The T 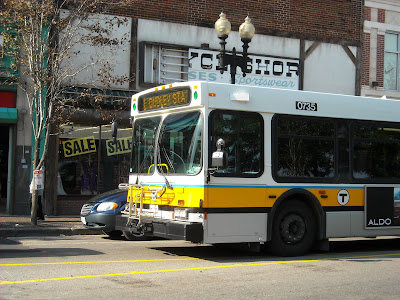 Being a writer and a poet, I often find inspiration in a variety of places. I was riding the bus recently when this came to me:

Wake Me When It's Over

So the word is out: the Globe has published a list of proposed service cuts that the MBTA is mulling over to close its $160,000,000 budget gap. I had hoped that the cuts would not be as bad as the 1981 service reductions (which seem to have faded from our collective memory), but in fact, they would be much worse. The good thing is that nothing is official...yet. To add insult to injury, many riders feel that the MBTA is just bluffing. Some people said the same thing back in 1981, then they woke up one Sunday to find that the Blue Line did not go to Wonderland anymore.

Let us take a look at some of the 2009 proposals "under consideration" and compare them with the cutbacks made in 1981; just to get an idea what we're in for. 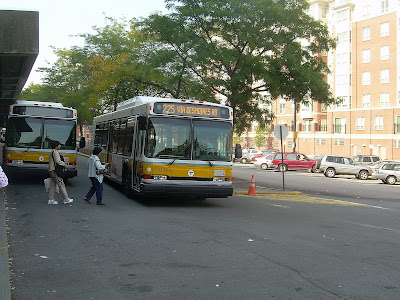 2009 Proposal: "Eliminate service at Quincy & Lynn bus garages after 9 p.m. weekdays and all day on weekends"

This proposal is terribly vague. Will service on the routes based at these garages be eliminated nights and weekends, or will they (like Fellsway and Albany) be covered by other garages? Lynn Garage is home to Routes 116 and 117, and I have a feeling chaos would ensue if service did not operate weeknights or over the weekend. I'm sure South Shore residents would be equally unhappy not have any service during these periods as well. And if another garage does cover them, you would have to train and familiarize the drivers with routes from another division. I know a few seasoned veterans at Charlestown who started out at Lynn...but that was fifteen to twenty years ago. Some might think that the 433 or 458 are still running. 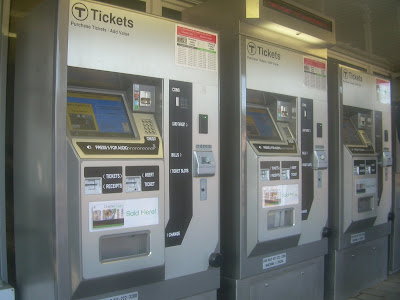 Several friends and I joked about personally staffing major downtown stations during our lunch breaks to give tourists and other riders directions, and to help with any CharlieCard issues. A volunteer CSA corps, if you will. But, alas! We could only do some much in an hour. So if you need help adding money to your card, or purchasing a ticket, I suppose you'll just have to watch someone else do it. Or visit youtube. Commuters will also lose touch with the "human side" of the T. Sure, you can call the information line or visit the website, but to have someone you can actually talk to in person; that can brighten up someone's day. 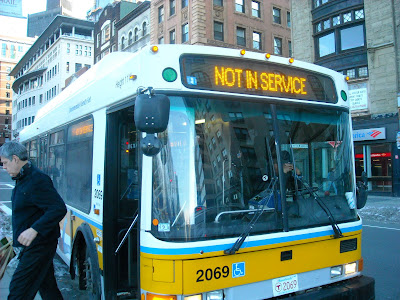 This photo happens to be from the final Route 195 trip.
TransitMaster had changed the sign before
I could get a photo of the bus displaying "195 DOWNTOWN".
2009 Proposals: "Eliminate highest net-cost-per-passenger bus routes" and "Eliminate routes due to network redundancy"

1981 Equivalent: Over 20 routes were eliminated and several pairs of routes combined (i.e. Routes 25 and 26 were merged to become the current Route 26).

Highest net-cost-per-passenger bus routes? What is "net-cost-per-passenger"? Basically, you take the total amount of money needed to operate the service, then subtract the revenue from fares ("farebox recovery"), then divide that by the total number of riders. The final value is the per-passenger subsidy the MBTA pays to keep service running. I went to mbta.com and pulled up a copy of the Final 2008 Service Plan. At the very end of the document is a table summarizing ridership, total cost of service, net-cost-per-passenger, service hours, etc.; all sorted by bus route. Doing a bit of digging I found some possible "high net-cost" candidates:

The system wide average for a bus subsidy is about $1.50. These routes average over three times that amount! The "exotic routes" (i.e. Route 170 and 355) we may be able to live without. But what about the others? As for "network redundancies" (jargon, anyone?), please do away with Route 25 (Ruggles - Franklin Park via Dudley)! This route operates only during the AM Peak, with a fifteen minute headway, and carries about 203 people per day. Often when extra equipment is needed, the 25 is first to "donate" its buses. We could press on without the 25; Cabot would love to have the extra three buses available during the AM rush hour. Perhaps, however, some of the other "redundancies" would be more greatly missed. 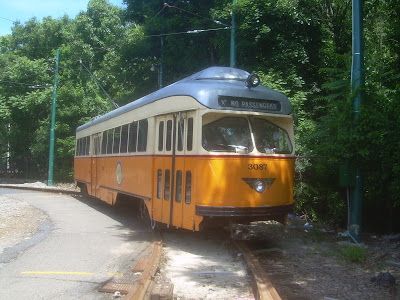 What did the Mattapan High Speed Line do to deserve such a fate? After carrying passengers (daily!) since 1929, must it now become no more than a rush hour and midday only shuttle? The night and weekend alternative is Route 24.3 (a.k.a "Route 24/27"). Service on this route operates every 60 minutes weeknights and Sundays, and every 40-60 minutes Saturdays. If this proposal becomes reality, I strongly encourage Arborway to borrow some 60-footers from Southampton, otherwise you are going to have some packed (Routes 28 and 111 packed) NABIs traveling along River Street. As for the Green Line cutbacks, no more E service on weekends? Do we really want all of those extra riders on the 39? And will cutting back service from Heath Street to Brigham Circle really save any money? The cantenary to Heath Street would still have electricity flowing through it (so no energy cost savings), the stops eliminated, save for Heath, are just segments of sidewalk with a "Green Line Stop" sign above them. Well, Fenwood Road does have a tall "T" sign, but you get the idea. Frankly, B Line stops are too close together, so cutting a few may not be the end of the world. The announcements sometimes stumble over each other, the stops are so close together: "Next stop Boston University West. Entering Boston University West." And doesn't BU have its own shuttle bus system? Well, enough of my ranting about Boston University.