Recently, I was looking at a CT3/171 schedule card from Winter Rating 2003. I have a pretty extensive archive of throwback schedules going back decades by the way. Anyway, so up in the corner I spot the 171 schedule information and get this! There are two school trips (i.e. trips added for the convenience of student riders) listed at 6:45AM from Dudley Station and 2:40PM from Airport Station.

Wait a minute, school trips on the 171? What's going on here?

The 171 operates two very early morning trips from Dudley Station to Logan Airport. Departing at 3:50AM and 4:20AM, few people know about its existence. The 171 provides transportation to and from Logan for employees whose shifts start/end before regular MBTA service hours. So what use would this route be for kids going to school?

I was stumped, so I consulted the wise Jonathan Belcher...

As it turns out, there was actually a group of students who took the CT3 (when it operated between Andrew Station and Logan Airport) from South Boston to a school in East Boston near Airport Station. Once that segment of the line was discontinued and replaced by the 171, the T figured that there might still be a demand. Thus, they created the school trips. As it turns out, not a single kid used the trips. They decided to take the Blue Line instead. These trips lasted only one rating (about three months). Oh well, it was worth a shot.

Also, I have finally taken a ride on the six-car Blue Line trains! The ride is much more comfortable, no more being stuffed into the cars during rush hour. Good job, Dan! Much appreciated!

Finally, it appears that I can upload videos to this blog. So expect some Boeing-Vertol LRV home movies soon!
Posted by The Lone Rider at 3:12 PM No comments: 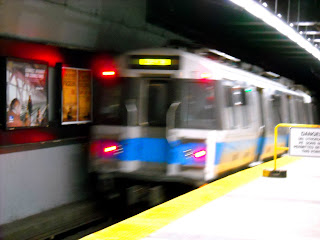 I am back from my summer holiday and am now getting back into the swing of things.

The MBTA has now released its 2008 Service Plan, which analyzes bus, subway, (and for the first time ever!) ferry service. Using existing resources, the Plan seeks to improve service and cut out waste. Sounds like a good idea to me! I have had a copy for at least two months prior to it being released to the public, but like a good novel, I didn't want to spoil the plot for you all. If you would like to download a copy for your reading pleasure, head here:

And be sure to attend some of the public workshops for the Service Plan in your area!

If you happen to be on the Blue Line next week, say around 5PM, you might see one of three six-car Blue Line trains that will be rolling out this coming Monday (September 15th). To accommodate increased capacity, the T has added these trains during the so called "peak of the peak", then the strain is particularly great. For anyone who was hoping to see a six-car consist of Hawker-Siddeley's, sorry, only the 700's will be trainlined this way. Don't worry, the six car trains will still serve Bowdoin Station, but you might have to change cars. It is impossible to extend the platform there without destroying the station and that section of tunnel. Now why didn't Ed Dana plan ahead for this?

About twenty buses equipped with Automated Passenger Counters (APC's) have been transferred from Charlestown/Bennett Garage to Cabot. These buses are equipped with sensors near the front and rear doors that count how many people board and alight. This data can be broken down by route, trip, and even bus stop. This is certainly a great piece of technology for the T, as now they are able to obtain more timely and accurate ridership counts. The buses (0735, 0737-0740, 0742-0745, and 0747-0753) are New Flyer D40's just like the buses they swapped with Charlestown. These buses, like the others, also feature security cameras. It seems that because of this, they are only being pulled out on the Route 23 (there is a bit of a backstory here, I'll explain later). However, I have seen them on other Cabot routes: 0752 and 0753 on the 16, 0745 on the 09, etc. Hopefully, when I ask for some ridership summary reports (yes, I plan to read some of them), I'll get a little variety. Maybe some 04's or possibly some data from the Route 9701? I'll keep my fingers crossed.

Posted by The Lone Rider at 1:33 PM No comments: