Goodness! My last post was back in late October? The ol' blog was starting to collect some dust. Well, I'm back from my little hiatus...and what a time to be back. Where to begin? 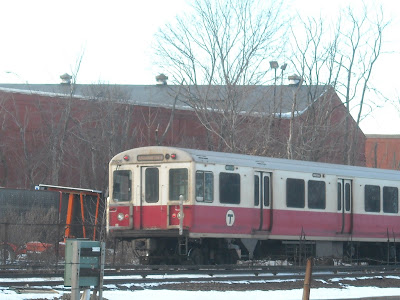 Let's start with the Red Line. 1521 had mechanical problems Monday morning, but thankfully I was traveling in the opposite direction. But the Red Line was not going to let me get away that easily. Tuesday afternoon I was heading to Park Street to meet a friend for coffee. She had sent me a text telling me that she was stuck at Ashmont and would be late because "of something going on at Alewife". Hmm, I thought, must be signal trouble or problems with the crossover. But no, the "something going on at Alewife" was a derailment. Despite being informed that service was delayed due to a "disabled train" and shuttle buses would be operating between Harvard and Alewife, I had a gut feeling it was derailment. As a general rule of thumb, rail service is rarely bustitued due to just a disabled train. Service would be delayed, but still running. MBTA doublespeak, don't you just love it? Seeing as the news would eventually reach the media, why not be honest from the start? By the way, my friend and I met up at Park Street 35 minutes after the appointed time.

Shuttle Route 612 (or is it 613 that covers that part of the Red Line, I can't remember) kept things running, somewhat. Watching the coverage on Channel 7 that night I spotted a few NABI's that were drafted for the shuttle; meaning that Route 01 and 66 riders lost a few of their buses during the rush hour. Ouch. I could only imagine the scenes along Mass and Harvard Avenues. Thankfully, no one was hurt on the train and service was (sorta) up and running by the AM rush Wednesday.

But on to happier things...

So what will Plans and Schedules, er, I mean Santa bring us this Christmas? The Winter 2010 Rating enters effect this coming Saturday and with it will come plenty of stocking stuffers, among them:

The holidays came a little early for the residents of John Eliot Square this year. As a partial replacement for the 28, new variations of the 44 and 45 were created to add extra service in the area. It seems the 14 and 41 alone were not working for them. The new service began operation shortly after the Cabot "B" Pick, which made possible a series of improvements to the key bus routes at that garage. Routes 44-3 and 45-3 serve John Eliot Square weeknights after 8pm and all day weekends. The change will officially be announced on the upcoming schedules.

Residents of Granada Highlands will also get a new variant, Route 430-2, which will add two new round trips weeknights when the 411 is not operating. See the schedule card or the MBTA website for details.

But of course, the first package I am going to unwrap is the 111-2. 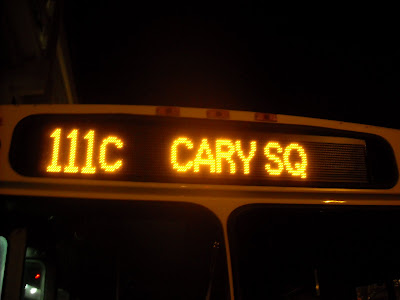 A new year, a new sign code, a new variation.
The 111 shall see sweeping improvements all across the board. In addition to extra vehicles at crucial times of the day, a new variation has been created. Route 111-2, Haymarket Station-Cary Square, will operate during the PM peak to supplement the regular 111-5 (Woodlawn) service. Headways and trip times have been adjusted to improve coordination between the two routes, so I encourage any of you 111 riders out there to pick up a new schedule card or visit the website. Midday and weekend service will also see some headway improvements, plus runtimes being adjusted to improve reliability. Like the 111-6 (Parkway/McDonald's) supplemental trips during the AM Peak, Route 111-2 (a.k.a. "Route 111C") will focus on the busiest part of the route and better meet the demand.

Visit the T website for more info on these and other changes.

On a final note, No Free Transfer will be changing its format slightly. Don't worry, I won't start writing posts in Nahuatl. Instead I will be writing more article-like posts, sorta like a newspaper column. But I will keep the quirky anecdotes and occasional rants. With that, happy holidays and see you all next year.
Posted by The Lone Rider at 3:18 PM